A Beautiful World | Write a Legacy Letter – So your great grandchildren remember you
1442
portfolio_page-template-default,single,single-portfolio_page,postid-1442,ajax_updown_fade,page_not_loaded,,qode-child-theme-ver-1.0.0,qode-theme-ver-7.6.2,wpb-js-composer js-comp-ver-6.0.5,vc_responsive

Write a Legacy Letter – So your great grandchildren remember you 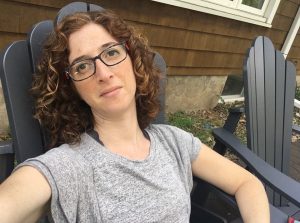 So, how many of your great grand parents can you name? We all have 8 great-grandparents, but most people can only name 2 or 3 at most. That means the odds are your great grand-children won’t know your name, let alone about your life, your thoughts or your memories. Statistically speaking, most likely you’ll be forgotten.

Unless you do something about it.

Something like write a legacy letter. it’s a place to state your beliefs, your values, your advice and how you want people to remember you.

Suzanne Pekow Carlson is a certified legacy navigator, which means she helps people write their own legacy letters, or “ethical wills.”  She says, “Unfortunately, people start to think about this on their death bed, but my mission is to get people to think about this now.

She’s passionate about the idea of legacy letters, because of a very personal experience she had with her mother. “My mom was diagnosed with pancreatic cancer, which is a devastating diagnosis. I think about her every day. I think about – where is she? I just wish I could have part of her stay with me all the time, and I think in a sense she is with me.”

Suzanne talked to her mom about writing a legacy letter, however her mother was very uncomfortable talking about death.  However, her mother did manage to write a letter, the night before she died. However, she only managed to write three paragraphs.

“The fact that my mom did not get to finish this letter, really makes me want to help people think about this before they’re sick, before they’re old. Think about it while you’re young and not have a stigma of death attached to it. 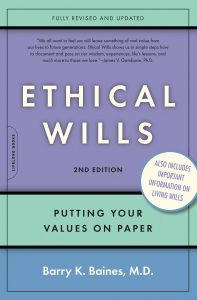 Suzanne’s experience is not uncommon, and that’s why Dr. Barry Baines says the best time to write a legacy letter, is right now.  Dr. Baines is a hospice medical director, the vice-president of celebrationsoflife.net and the author of Ethical Wills, Putting Your Values on Paper. He’s a powerful advocate for legacy letters, some of which still stand out in his memory.

Like the very first legacy letter ever written in his hospital. It was written by a man named Dennis, who was in his early 40s, and dying. He was suffering from extreme existential angst, according to Dr. Baines, because he hadn’t accomplished much in his short life, and he thought he had nothing to leave behind.

“Here’s a guy, who didn’t have much in the way of assets or education, fairly low-level jobs, bounced around a lot. He had a wife and two younger kids who he loved. Here he felt he was a failure in life and now he was dying, would not make his mark and he’d just be forgotten, the first wave would come up and wash away the footprints on the sand and I said, well maybe Dennis doesn’t have much in the way of valuables to bequeath his family, however what about values? This idea that this might be appealing to him, might give him some of this transcendence, the idea of being remembered.”

Not surprisingly, Dennis grabbed onto this the way a drowning man would grab onto a life preserver, and as soon as he was done, he now had something actually very tangible that he was going to leave behind for the people that he loved.

Dr. Baines says that you can start your own legacy letter by answering three short questions: How do you want to be remembered? What’s something you’ve learned from your parents? and What challenges have you overcome? Answer those, and you’ve already begun your legacy letter. and your great grandchildren might even remember your name.

Start your Legacy Letter at https://celebrationsoflife.net/