Nikki Collins and her six kids live in a public housing complex on Cleveland’s near east side,  where she says buying healthy foods for her family is an ongoing struggle,  because they live in an urban food desert. A food desert is an area that lacks access to good food. “I’m on welfare,” she says, “We survive on food stamps. It’s heartbreaking to me, because my kids are hungry, they want a snack, but nutritional things can we buy that are cheap and that we can use?” 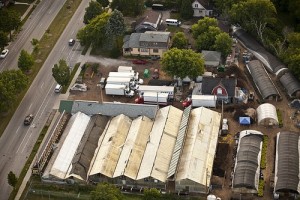 Will Allen has dedicated his life to eliminating food deserts. He’s an urban farmer in Milwaukee, and he says Nikki is not alone in her struggle to feed her family healthy food. In fact, “The USDA reports over 23 million people in the United States live inside food deserts, with limited access to grocery stores or fresh produce. Imagine millions of Americans, many of them women, children, elderly and/or disabled, who everyday must make the impossible choice of eating Junk food or NO food at all.

The Grandfather of Urban Farming

Allen was born in 1949, the son of a sharecropper and growing up, 95% of the food they ate, his family grew themselves. He says loved eating fresh food as a kid and he must have, because he grew up to be six feet, six inches tall. He was proficient at basketball and was a 4th round draft pick for the Baltimore Bullets in NBA, but never played in the league. He went on to become a corporate executive for Proctor and Gamble, which he says provided a good income for his family, but his love of farming never left him. Today, after having several successful careers in different fields, he’s best known as the “Grandfather of urban farming,” which he believes is the only way to feed our planets growing population. 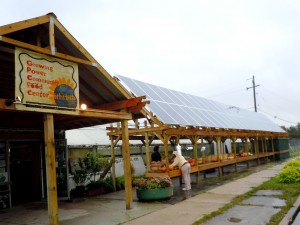 Allen says there’s only one way to feed that many people and it’s to start growing food right where they need it and eat it.  That means putting farms inside cities, but how do you build a farm inside a city?  How do you grow more food …with less space? How do you grow crops…surrounded by asphalt?  Allen says way to do it is to GROW UP, to start building farms vertically, using space that traditional farmers overlook. That’s exactly what he did, when he built one of the nation’s first urban farms back in 1993. He was driving through a poor neighborhood in Milwaukee, when he noticed an old abandoned greenhouse on the corner that had once belonged to a florist, but now sat empty and deserted, with broken windows and dirt floors. To the outside world the greenhouse looked derelict, but to Allen it looked like heaven. 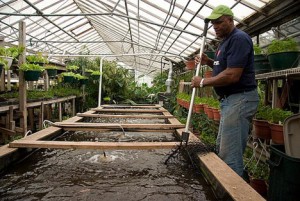 The Ancient Art of Aquaponics

Allen bought the greenhouse on Silver Spring Drive, which was right in the middle of a vast urban food desert, located four miles from nearest grocery store and only five blocks from largest housing project in Milwaukee. He opened a small vegetable stand, becoming the first and only place to sell fresh produce anywhere for miles. He employed kids from the neighborhood as he expanded, many from the nearby housing projects. They helped him grow the vegetable stand into a working farm – as Allen tweaked his growing methods and maximized space with an age-old farming technique called Aquaponics, which is the ancient agricultural practice of growing fish and vegetables together.

The basic system in Allen’s greenhouses is this:  He starts with long trenches dug into the ground, about five feet deep. He’s filled those trenches with water and stocked them with Yellow Perch and Tilapia, which he says provide some of the best fertilizer for his plants and are also a highly valuable crop themselves. Over the fish tanks he’s built a series long vegetable beds and growing beds all suspended and hung at different levels, some seven tiers high. A complicated network of PVC pipes carry nutrient-rich water from the fish tanks up to the top shelves, where it trickles back down, watering every plant, before finally returning back into the tank where it started, only now the water is clean.  All the nutrients and bacteria have been removed by the plants and their root systems on the way down.

It’s a symbiotic farming system –   the fish fertilize the plants and the plants clean the water.  No chemicals or pesticides are needed.   He says the whole idea behind this symbiotic and sustainable ecosystem is to get every element helping the next element grow.“It’s not about how much land you have, it’s what you do with the land you have. Every square foot is important.” 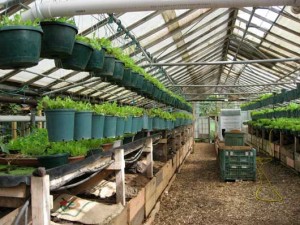 Sunlight warms the fish tank water, which in turn heats the entire greenhouse. Solar panels provide any additional energy needed, no fossil fuel is used. Neither is farming equipment, except for some shovels and wheelbarrows.  The farm produces its own soil, from waste that would normally go to a landfill and a handful of chickens and goats take care of the rest. Best of all, because the crops are grown indoors, Allen’s urban farm operates all year long, even in the middle of winter, when traditional farms are shut down. The results are astounding. Will Allen grows over one million pounds of food every year, using no chemicals and a minimum of equipment and he does so on a two-acre city block in downtown Milwaukee.

The Future of Farming? 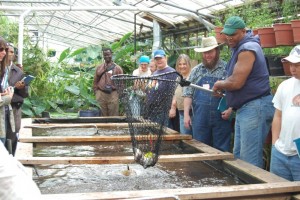 Allen believes this is the future of farming.  The next generation of farmers will  come from the city and farms in the future  will need to be creative inventive and unusual – he encourages anyone passionate about urban farming to dive in and try it – even when  conditions are less than ideal –  he says idealism can lead to inaction and there’s no simply no time.  People need healthy food now.

“These communities are hurting.  You can’t wait until everything is perfect, because I don’t know if there is such a thing. You just have to start them and tweak them along the way. It will never be perfect, you just have to keep moving forward.”

Will Allen’s passion, tenacity and inventive farming techniques have paid off big.  Today his organization, “Growing Power” is an internationally recognized non-profit that helps build urban farms across the globe. Allen himself has won a MacArthur Genius Award, he’s been named one of TIME Magazines “Most Influential People” and he was invited to plant a vegetable garden at the White House. Allen says the key to his success is a love of farming, the belief everyone deserves access to fresh food and a fiercely competitive spirit.

“If you believe in your dream, don’t let anybody tell you that you can’t do it – just work at it and make sacrifices. That will be the driving force will be to fulfill your dream.” 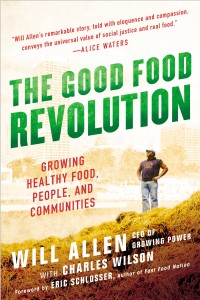 Will Allen’s book, “The Good Food Revolution, Growing Healthy Food, People, and Communities,” details how to start your own urban farm, and recounts the enormous challenges he’s overcome. Today, “Growing Power” produces a million pounds of fish and fresh produce every year – all on one industrial-sized city block. That’s enough to feed ten thousand local residents, while strengthening the community, creating new jobs for inner city kids,  improving peoples health and eating habits, and he does all of this sustainably, without using any chemicals, pesticide’s or fossil fuels.  Milwaukee might be freezing cold during the winter, but there in the middle of that snowy, icy-white city, there’s a warm, lush, verdant greenhouse blooming year round.   It’s Will Allen’s dream,  a food revolution, and …an invincible summer.

**Special thanks to WVIZ/PBS and the Ideastream Network for providing content from their “Be Well” series: “Obesity, Poverty and Food Deserts.”

*Photos Courtesy of Will Allen and Growing Power