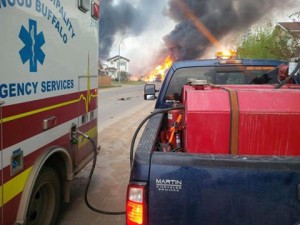 On May 3rd, 2016 a wildfire raced suddenly towards the town of Fort McMurray in Alberta, Canada. Residents have mere minutes to flee the city before it burned down, and many of them escaped with only the clothes on their backs. Worse, there was only one road out of town, Hwy 63 and the nearest town was 4 hours away.

The few gas stations nearby ran out of gas or went up in flames, stranding many evacuees by the side of the road. As emergency services worked frantically to control the fire before it consumed the city, residents were left alone to find a way south. Enter the heroes of the day The Western Canadian Powerstrokes, a Facebook page of Ford Motor enthusiasts with over 3,500 members. When word got out that hundreds of people, families, women and children were stranded helpless by the side of the road, the WCP quickly organized a fleet of civilian trucks to deliever gas water and supplies not only the evacuees, but to fire trucks and emergency services as well.

Listen to how an informal group of “Big Hearted Truckers” stepped in, stepped up and saved the day. 90,000 people were evacuated in mere hours, without one fatality.