A Beautiful World | Eye of the Shoal
1375
portfolio_page-template-default,single,single-portfolio_page,postid-1375,ajax_updown_fade,page_not_loaded,,qode-child-theme-ver-1.0.0,qode-theme-ver-7.6.2,wpb-js-composer js-comp-ver-6.0.5,vc_responsive

Eye of the Shoal

More About "Eye of the Shoal"

There’s no such thing as a fish? 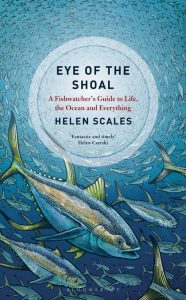 Helen Scales, 41, Marine Biologist and author of “Eye of the Shoal, A fishwatchers guide to Life, the Ocean and Everything” says in a way there’s no such thing as a fish, just hundreds of thousands of creatures that are excellent at swimming.

Scales says while it’s true all fish are technically related to each other on the evolutionary tree of life, they’re so varied and different, it’s hard to lump them all into one category. “It’d be like saying spiders and octopuses are related because they both have 8 legs.”

She reasons that some people have a problem with the identity of fish because vertebrates – mammals, reptiles, amphibians – all evolved from fish. “At some point hundreds of millions of years ago, a fish basically upped and left the ocean and lived on land and they gave rise to us. So, we are basically highly-evolved fish and I’m fine with that!”

Scales is no doubt fine with that, because she loves fish. She loves watching them, and studying them. Woven throughout her book are vignettes of her own aquatic explorations, from eerie nighttime dives with glowing fish and up-close encounters with giant manta rays, and floating in the middle of a swirling shoal, being watched by thousands of inquisitive eyes. She hopes to connect her readers with fish beyond as menu items on their dinner plate.

“People often don’t have a strong connection to fish, because they’re not really in our daily lives.  People don’t see fish, we don’t encounter them apart from as food.  It’s really hard to connect things that we eat, to beautiful, fascinating wildlife. There’s a barrier that comes down between us and our food. I wanted to push through that and share with people my experience with seeing this enormous diverse extraordinary group of animals, watching them and really getting to know them in different ways.” 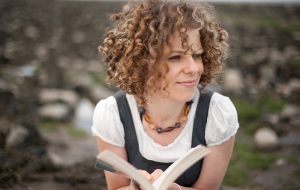 Scales wants us to see fish differently. With the ocean covering over 70% of the earth and nearly twenty-eight hundred thousand known and named species of fish to choose from, she hopes we’ll not only start to think of fish as wildlife, but as wildlife that demands our attention and protection. That starts with choosing which fish we eat more carefully.

“I’m hopeful because through things like social media, you become aware there are people all around the world who share my ideas of loving the ocean and loving nature and wanting to do something about it and I do think our voices are being heard more strongly.  I think we can all play a part in that and I think we need to remain hopeful, I really do.”

Scales recommends downloading a sustainable fish app to your phone, like The Good Fish Guide, so you can make dinner choices wisely. For example, Scales says absolutely no one should be eating bluefin tuna right now.

Helen Scales; my idea of a beautiful world I think, has to be an underwater world that’s full of diverse colorful fish, all the creatures that should be there playing their roles,  interacting with each other, making more of themselves, just getting on with the vital roles of being wild creatures doing what they should be doing.