More About "The Water Lens" 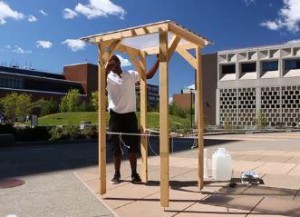 DeShawn Henry – I knew from day one I would feel joyful inside knowing we could help many people in developing countries and save lives.

HM – That’s Deshawn Henry. He’s nineteen years old and a sophomore at the University of Buffalo in New York. He’s developed an amazing new device that creates fresh drinking water quickly, cheaply and without using any chemicals or electricity – and since over a billion people lack access to fresh drinking water and 3.4 million people die every year from water-related diseases, the hunt for new water purification technologies has never been more critical. Deshawn calls his invention ‘The Water Lens’ and he created it with his professor, Dr. James Jensen, who runs the University of Buffalo’s civil and structural engineering department.

Dr. James Jensen – We’re focused on how can people treat water themselves without having to rely on outside countries or companies. So we’re looking for ways to give people in the developing world ways to treat drinking water that they can use just the natural materials they have around them.

HM – Using natural materials is a key component of Jensens work. He says the program used to focus on water treatment technology that required increasing amounts of chemicals and more electricity, but those were two things developing countries didn’t have. He realized what people really needed was ways to create clean drinking water without electricity or chemicals, using elements they already had around them. Thats what makes the Water Lens so unique. It requires only wood and clear plastic sheeting, both of which are often in abundance at aid stations. The way the Water Lens works is by harnessing the power of the sun. It heats water up with condensed sunlight, sort of like if you took a magnifying glass and held it over a pot of water. The goal is to kill dangerous bacteria and to do that you need to get the water heated to one-hundred-and-thirty degrees. 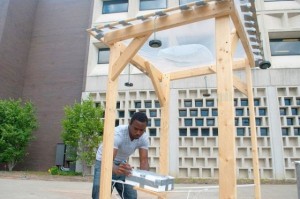 JJ – So we build a tall frame, about six feet tall, and we stretch a piece of plastic over it, like plastic film, and if you pour water over that plastic, the plastic will sag down and it forms a nearly perfect mathematical shape, like a lens. As the sunlight that hits the top of that lens, it will be focused underneath the lens, and if you put something at that focal point, it’ll get pretty darn hot.

HEM – Hot enough it turns out, to kill dangerous bacteria and create fresh drinking water. Jensen says temperature isnt the only way to kill pathogens. He and his students are also working on other ultra-green technology that involves using indigenous plants, native fabric and ceramic pots, all which also create clean drinking water without electricity or chemicals, which is essential fro developing areas that need clean water the most. I asked him where he got these inventive ideas and he confessed that some of them came from some pretty unconventional places.

JJ – the water lens idea, I’m a little embarrased to say, came from a Youtube video, where someone had built this as a toy in their backyard to light fires, and my students and I realized it could be used to treat drinking water, so some ideas come from strange places but if your mind is tuned to these things, sometimes these crazy ideas just resonate.

JJ – Right now, we’re just doing one liter at a time, which is a very small amount, but we have the mathematical model so we understand how the process works so we have a good feeling for how big we’d have to make them but we are hopeful this is something that will help people.

HM – That was Dr. James Jensen and his student, DeShawn Henry, from the University of Buffalo Both are making the world better one sip of water at a time. I’m Heather McElhatton and this is A Beautiful World.

JJ – To me a beautiful world is a place where people care more about the enviornment then they do about themselves.