More About "Rescuing Animals in Winter" 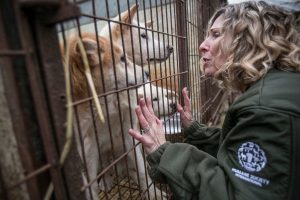 Kitty Block, President of HSI, gets emotional after she greets the dogs at a dog meat farm in Namyangju, South Korea, on Tuesday, November 28, 2017. The operation is part of HSIs efforts to fight the dog meat trade throughout Asia. In South Korea, the campaign includes working to raise awareness among Koreans about the plight of meat dogs being no different from the animals more and more of them are keeping as pets.

As temperatures drop and humans bundle up, homeless animals and wildlife need a helping hand. A warm, witty and dedicated woman named Kitty Block is working hard to make that happen. Block has worked for over 25 years on improving life for animals worldwide, currently as CEO and president of the Humane Society of the United States and resident of Humane Society International.

Global efforts to protect  gorillas, whales, dolphins and dogs have been key elements in her career. Block tells a story from her long career saving animals, when she and her colleagues rescued dogs from a dog meat farm in South Korea.

“These dogs are basically starving and living in their own filth, so we started putting food down immediately,” she said. “What broke my heart the most was they were knocking their bowls over, trying to get to me, trying to have any contact or love. Their tails were wagging. I thought, ‘God, these animals are so abused and have not seen any kindness, and yet they’ll choose any kind of touch or human kindness over food.’ It was heartbreaking, but it was empowering too, that we had rescued all those dogs, and we were bringing them home.

“We’ve now shut down 18 farms and hopefully within the next year or two, we’ll see an end to the dog meat trade. That’s only one story, but one I’ll never forget.”

Block said she can face such situations for one reason: She’s able to take action. 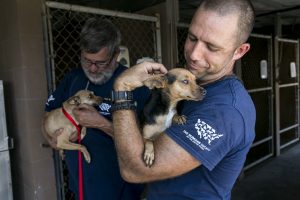 John Peaveler, right, and Dave Pauli, left, both with the Humane Society of the United States, HSUS, holds dogs found after Hurricane Harvey at a shelter in Rockport, TX on Saturday, September 2, 2017. (Photo/Scott Dalton)“Because I’m doing something,” she said. “If it’s an issue I can’t work on,  that’s when it’s hard. When you take action, you’re not going to be able to do it all dash; no one can, but your action leads to others taking action, and directly helps the animals. It just keeps building on itself. So you need those individual acts, or nothing’s going to happen.”

It’s not necessary to adopt an animal to help out. “I could rescue all the dogs that I see, and I obviously travel around the world, and there are so many street dogs in different countries,” she said. “And I do have an adopted street dog, but that doesn’t solve the problem. The only way to get at the heart of these problems is to attack them head-on.”

One of the biggest problems for animals and shelters right now in many parts of the country is cold weather. Winter means animal shelters need more food and supplies than usual. Even donating clean used blankets can have a huge impact.“It’s so important to do these things. It really is. They need that kind of comfort and protection.”

Aside from donating to local animal shelters, people can also help local wildlife by providing food and fresh water outside, according to Jim Monsma, executive director at City Wildlife, which rehabilitates injured and orphaned wild animals in Washington. He explained that when temperatures drop below  freezing, it’s harder for wildlife to find fresh water. “Any living being can go without food for quite some time, but they need constant water,” he said.

Monsma recommends putting out fresh water every day or buying a heated birdbath that can be placed on the ground so more wildlife can reach it. “You’ll find if you do that the animals are very appreciative, and it’ll become a busy little birdbath soon,” he said.

Kitty Block believes we have an obligation to help animals. “It’s a responsibility we take very seriously, as do the majority of people around the country and the world,” she said. “Poll after poll shows that people have compassion for animals and they want to do the right thing by animals.”

Setting out fresh water, dropping off blankets, donating pet food or cleaning supplies to local shelters, it all adds up to helping animals in winter. You can visit the Humane Society online for a full list of ways to help animals and animal shelters in winter.

As Block ventures into a new year helping animals, she believes protecting the weakest among us is key to society. “A beautiful world is one where there truly is a humane society, and where there is kindness. I believe so much of that stems from how we treat animals and children. If we can be humane and kind to those who are voiceless, we can be humane and kind to ourselves.”