Over 2 million dogs are euthanized in U.S. shelters every year due to lack of space, could prisons offer a unique solution?

Dogs on the Inside  follows a group of prisoners incarcerated at the North Central Correctional Institution in Gardner, Massachusetts, who’re enrolled in a special animal rescue program called, Don’t Throw Us Away.  This non-profit rescues unwanted and abused dogs, with nowhere else to go and fosters them in prisons, with inmates who work hard to help them rejoin society. 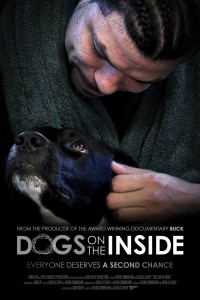 The documentary was directed by Brean Cunningham and Douglas Seirup, who both say they set out to tell an inspiring story about a subject matter that’s too often mired in despair. “In making this film, we hope to reaffirm people’s faith in the goodness of humanity and move people deeply enough to see the power of a second chance.”

The film opens with volunteers finding abandoned and abused dogs, some as far away as Tennessee, and then transporting them in specially modified trailers thousands of miles North, where the dogs are assessed and treated by veterinarians. Dogs who qualify are taken to the North Central Correctional Institution and introduced to prisoners, who also must meet several qualifications before handling the dogs, including having a proven track record of self-improvement and a non-violent offense history.

Once the dogs and prisoners are paired up, they live together  full-time for eight weeks. They sleep together, eat together, exercise together and take obedience classes together. This level of closeness promotes bonding between inmates and dogs and builds a deeper level of trust and communication, which is critical to rehabilitate the dogs and get them to trust their new pack leaders.

While prisons may seem like an odd idea for animal shelters, Michelle Riccio, founder of the Don’t Throw Us Away program, considers them a unique solution to one of the largest obstacles animal shelters have: Not enough space.  Over two million animals are euthanized in U.S. shelters every year mostly because shelters run out of room to put the animals. Animal rescue groups like hers are limited by how many foster homes they have,  the more foster homes they have, the more animals t 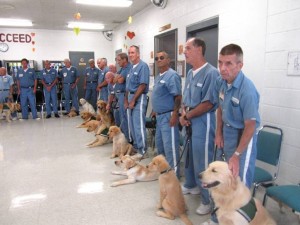 hey can save. “We have a prison system with approximately two million inmates, many of which can provide homes for all those dogs that these animal rescues don’t have space for.”
While some might wonder if a hardened criminal can emotionally care for an animal, others feel that’s the very reason the program works so well.  The dogs and the prisoners understand each other on a deeper level, in a way that outsiders can’t. The dogs don’t judge the prisoners, and the prisoners understand why the dogs are struggling. Both know what it’s like to have dark histories, to be thrown away, to be forgotten. Both need a fresh start –  a second chance, which they seem able to give to each other. “Some of these dogs have been in the street,” Candido nods. “They’ve been abused, found in dumpsters, ditches… hurt, beat up, starved… I can relate to a lot of the dogs. Especially Sam… because he was left behind, you know? And I went through that as a kid myself, so I know.”

The Power of Unconditional Love

The ultimate goal of the program is to rehabilitate the dogs so they can find forever homes, something that most of these dogs had no hope of finding before they arrived. Rehabilitation isn’t always easy, as many if not most of these dogs come from bad backgrounds, they’ve been abused, abandoned, neglected or left for dead.  Many of them are fearful, if not aggressive towards humans and the inmates have a lot of hard work to do in order to transform these stray dogs into loving pets. But transformations happen. Not only in the dogs, but in the prisoners as well. It’s clear that while inmates are rehabilitating the dogs, they’re also being rehabilitated themselves. 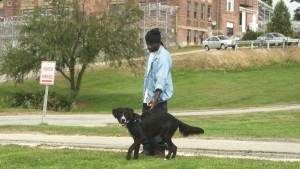 Anita Collins is the Treatment Director at North Central and she says the dogs give the inmates something that some of them have never had. “It’s all about unconditional love. The prisoners need that and the dogs need that.”  She speaks about the many transformations she’s seen in the prisoners working with dogs.  “You’ll see an inmate bending down just talking to a dog or sitting on the ground with a dog or carrying a dog if its sick. Before that you’d look at them and say… you know I really don’t know about that guy… and then all of a sudden you see the true inmate coming out.”

The prison dog program has a strong track record of success. Candido and his dog, Sam, are such examples. Sam graduated from the dog training program and has found his forever home.  Candido himself has also been released from prison, found a good job in construction and is starting a new family, which includes three dogs of his own.The inmates notice changes in themselves too. Candido has witnessed rival gang members working with dogs, who started cooperating with one another and even becoming friends. One reason for this he says, is the connections the prisoners are able to build with their dogs and the communication. “I talk to Sam all the time,” he says. “I tell him things. That dog’s like a psychiatrist for me or something. It’s weird.” 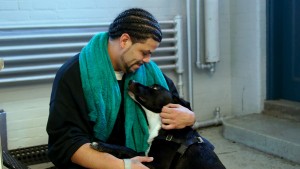 Candido says watching Sam’s transformation in prison helped him with his own. “Sam was very afraid when he first came. He wouldn’t even come out of his cage. It took a lot of time, but it happened, he’s a different dog now. His tail is wagging, he prances around now. He’s happy. I think in a sense he forgot his past. He’s a dog who’s gone through so much and has changed drastically, and I know by seeing that thru Sam nothing is impossible …. nothing is impossible.”

As the program gains popularity and grows its roster of rehabilitated dogs and inmates, other correctional facilities are starting to develop similar dog training programs.  Visit Dogs on the Inside online to watch the full documentary and find out more about the prison dog program.