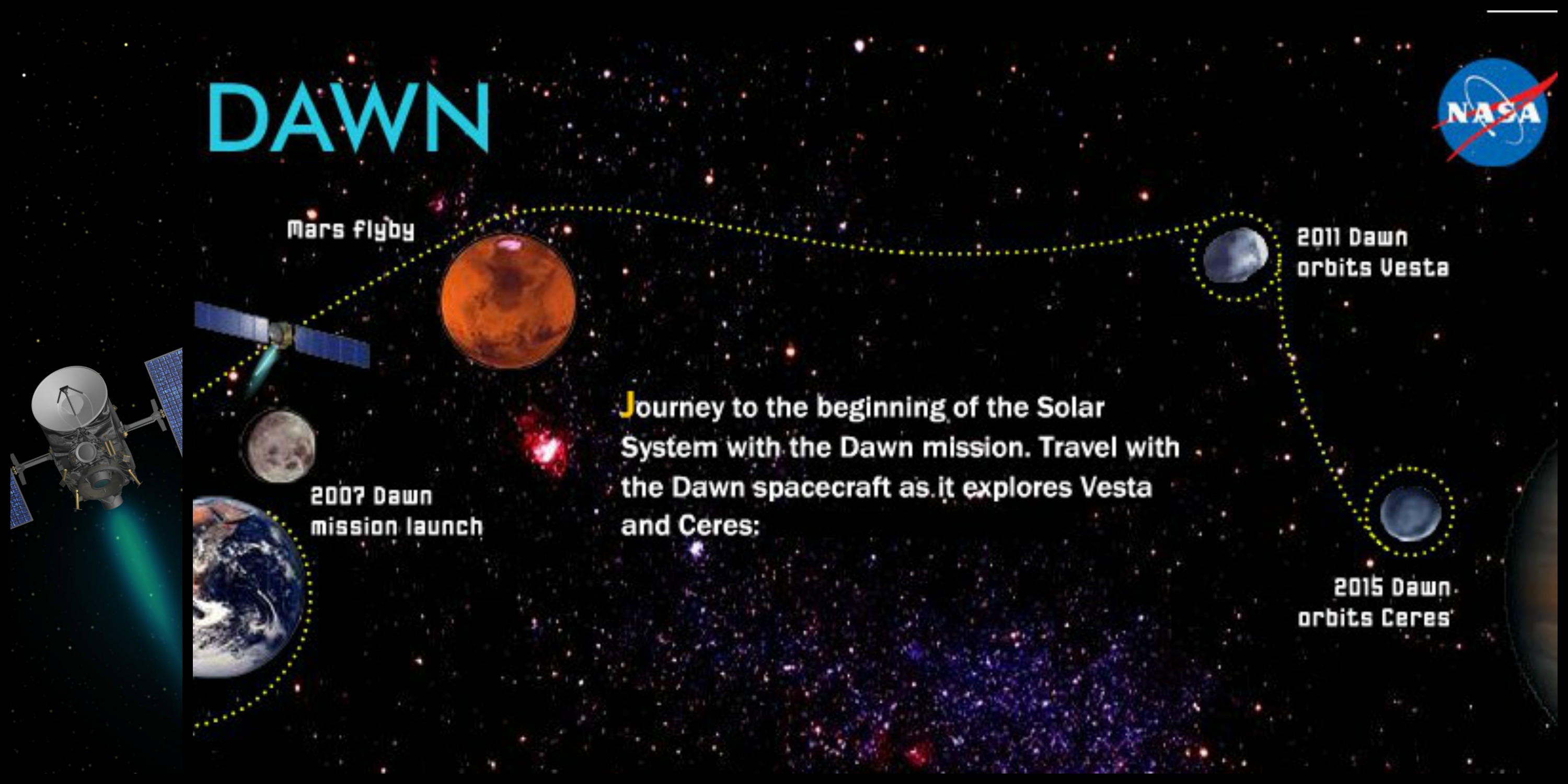 “We may be humbled by our own insignificance in the universe, yet we still take the most valiant adventures in our attempt to understand it’s majesty.”

Dr. Marc Rayman is the chief engineer and mission director for the Dawn Mission, in NASAs  Discovery Program.  The missions name, “Dawn” came from the core objective of investigating these worlds for a better understanding the origins of our 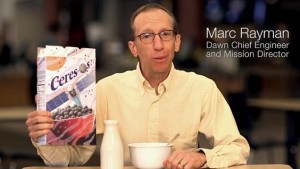 universe.  Dawn’s actual mission is to investigate the last two uncharted worlds in our inner solar system, Vesta and Ceres, the two largest celestial bodies rollicking around in the asteroid belt between Jupiter and Mars. They’re so big they’re not even considered asteroids, give Vesta is a “Protoplanet” and Ceres is a “Dwarf planet,” like Pluto.

Dawn was launched in September of 2007, from Cape Canaveral and has spent  the past 7 years flying  through space, past the sun, to the asteroid belt between Jupiter and Mars. It took five of the seven years just to get there  and Rayman says that’s part of the fun, controlling a space craft that’s so far away,  it’s over a thousand times farther away than the International Space Station.

Dawn is the largest space probe NASA had ever launched, its sixty-five feet from wingtip to wingtip and each wing is the width of a tennis court. It’s an exciting mission full of “firsts,” the first mission to explore the asteroid belt, the first craft to use ion propulsion and the first craft to explore two different worlds on one mission. Going to two separate worlds on one mission might not sound like a big deal, but Marc Rayman says it is. 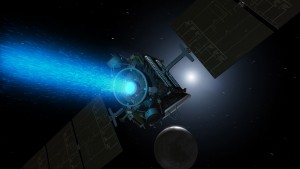 “It happens in science fiction all the time, you go to some planet and do whatever you’re going to do there, beat somebody up or make out with them and then go to some other planet and do the same thing. But until ion propulsion became available, such a mission was impossible because its far, far beyond the capability of traditional chemical propulsion.”

Ion propulsion is critical to the Dawn mission, it’s a powerful and highly fuel efficient technology  that makes the complicated maneuvering of visiting two separate planets possible. Ion Propulsion is a technology most people are familiar with (although many without even knowing it) because of the movie, Star wars. Darth Vader and Luke Skywalker fight using T.I.E  fighters, big white spaceships that stand for “Twin Ion Engine.” Dawn does Star Wars one better however, by having three ion engines onboard. 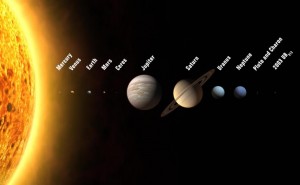 “The ion thruster is powered by large solar panels. The power ionizes the fuel (Xenon) and then accelerates it with an electric field between two grids. Electrons are injected into the beam and can generate speeds up to ninety thousand miles per hour.”

That makes ion propulsion highly fuel efficient,  it’s like getting 300 miles per gallon in your car. Besides this space age Ion-propulsion technology, Dawn is also carrying a impressive array of sophisticated cameras and spectrometers onboard,  that can measure everything from  magnetic signatures to surface structure mineral compositions.

Despite Dawns advanced architecture, not everything onboard has worked seamlessly. Two of Dawns four reaction wheels have already failed, which are the wheel mechanisms that allow Dawn to rotate and stabilize in deep space.

mission despite the loss of these two wheels, a loss we would have previously thought fatal.”

Dawn’s flight team not only managed to continue flying the semi- hobbled space craft, they’ve maneuvered out of  its first orbit around Vesta, to its final and much bigger destination, dwarf planet Ceres, where it continues to make fascinating and tantalizing discoveries like volcano-shaped formations on Ceres surface and a mysterious collection of unexplained bright lights clustered inside a crater.

“It’s impossible not to be mesmerized by these glowing beacons, in some sense their glow illuminates the way from a bold ship from earth sailing on the celestial seas to this mysterious uncharted port…it makes you want to send a spacecraft there to find out what it is, and by golly that’s what we’re doing.” 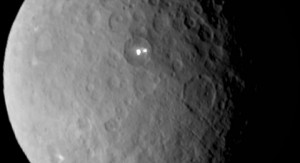 While nobody knows what these bright lights are yet, many have speculated they’re a highly reflective geological surface like ice or water vapor or even salt beds. Some have even evoked the “A” word.

Rayman says  people often ask him  if these lights could be coming from alien cities and this funny, often-poetic rocket scientist replies, “That’s ridiculous. Utterly ridiculous. How do we know if Cerean’s live in cities? Maybe they’re a rural community.”

It’s rare scientist that has the soul and stand-up comedy skills that Dr Marc Rayman does. He’s one in a million and so are the discoveries the Dawn Mission is making on Vesta and Ceres. He says the diligence, dedication and passion that he and everyone else involved with the Dawn mission shares is what’s making the mission a success, including those people outside NASA and JPLs walls, people who look up at the night sky and wonder what’s out there – they too are part of the mission. 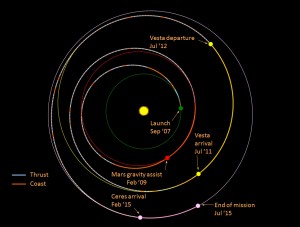 “To me, anybody who ever looked up at the night sky in wonder participates in a mission like this. It’s not just Ion Propulsion that fuels Dawn, it’s the fires that burn within all of us. ”

You can keep track of the Dawn Mission and its many amazing discoveries on NASAs website. There you’ll find Dr, Marc Rayman’s blog along with his many thoughts on this daring, delightful, deep space mission.  “To me a beautiful world is a world where we not only appreciate beauty bit we understand it as well. That’s what makes it beautiful to me.”

Marc D. Rayman is the Dawn chief engineer and mission director at JPL. A lifelong space enthusiast, he began writing to NASA when he was nine years old, and joined JPL after receiving his Ph.D. in physics a few years later. He has worked on a wide variety of astrophysics and planetary missions but, of course, nothing else as cool as Dawn. He enjoys sharing the thrill of exploration and the rewards of scientific insight with the public. Fans of Dawn throughout the cosmos follow this mission by reading Marc’s Dawn Journal.