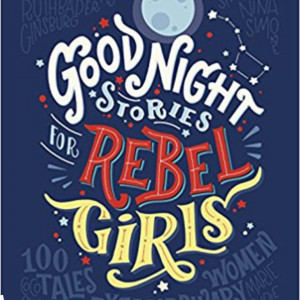 Elena Favilli: We didn’t want to give children the usual fairy tales.

Heather McElhatton: That’s Elena Favilli (ELLEN-ah FAH-vee-lee), who wrote Good Night Stories for Rebel Girls, with co-author Francesca Cavallo (FRAHN-chess-kah -KAH-vall-oh.)  It’s not your typical book of fairy tales, these stories are true and all about real women around the world,  who accomplished amazing things. The authors got their idea for the series after hearing Gina Davis speak about gender inequality in children’s media.

Geena Davis: My institute has done the largest body of research ever done on gender in film and television covering a 20-year span, and the results were stunning.

Heather McElhatton: Davis discovered there were far fewer female characters in children’s media, one female to every three males, and the females she did find…weren’t very realistic.

Geena Davis: Often the female characters’ waist is so tiny, you have to wonder could you fit a spinal column in there? And the most common occupation for women was royalty, which is a nice gig if you can get it.

Heather McElhatton: When Favilli and Cavallo heard these statistics, they decided to do something about it. They wrote: Good Night Stories for Rebel Girls,  a children’s book packed with 100 bedtime stories about the lives of 100 extraordinary women from the past and present, illustrated by 60 female artists from all over the world. Stories about Queen Elizabeth to Serena Williams, from Eva Peron to first female African American astronaut, Mae Jemison, just to name a few.  The stories include women from modern day history and from the ancient past.

Elena Favilli: There is one (story)  that I particularly love, which is this female Pharaoh, who lived long before Cleopatra, her name was Hatsheput. She was the first female Pharaoh to rule over Egypt, she was a very successful leader but after her death, they tried to destroy her memory.  Her statues was smashed, and every living memory of her reign and of her life was basically destroyed, because they feared other women could then, based on her example, try to seek power.

Heather McElhatton:  Elena says this is symbolic of the stories they try to capture, and the women they write about. Women who might be lost in history or overlooked in far away countries. Co-author Francesca Cavallo’s favorite story is one of modern day women.

Francesca Cavallo: That’s the story of the ‘Black Mambas,’ and this is the story of this group of rangers that have revolutionized the way they patrol the national parks in south Africa,

Heather McElhatton: The Black Mambas are 26 women in South Africa, who patrol nature preserves and protect endangered animals by working together and collaborating, a concept Francesca Cavallo says shatters the typical female stereotype in most stories.

Francesca Cavallo: Usually in traditional fairy tales, women are rivals, they can’t stand each other, they try to kill each other. Instead, in our books, women collaborate and do all sorts of incredible things, and that is one of the aspects I am most proud of in our books. 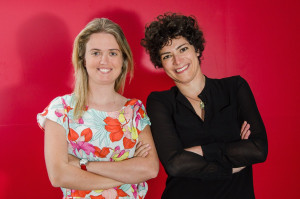 Heather McElhatton: according to Elena Favilli, there’s one thing all the women in their books have in common:

Heather McElhatton: The series Good Night Stories for Rebel Girls is launching a podcast featuring a new rebel girl every week. go to a beautiful.world to learn more.

Elena Favilli:  My idea of a beautiful world is where women are free to choose for them selves, for their bodies, for their futures.