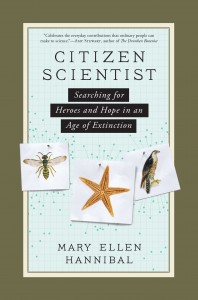 Citizen Scientists Can Save the World

The World Wildlife Fund just came out with a report showing that we have lost half of the numbers of wild species on this earth in the last 40 years alone.

Mary Ellen Hannibal, author of Citizen Scientist, Searching for Heroes and Hope in an age of extinction says, “It’s important to think of extinction as visions of the polar bear on the ice flow, or African elephants being hunted to extinction for their ivory, but just as important are losing numbers of species in our own backyards. The number of birds migrating overhead. the number of butterflies migrating through are being vastly reduced by human impacts.”

Hannibal believes that one of the planets greatest hopes for survival is a growing league of “citizen scientists.” Citizen science is a general term referring to regular people without advanced degrees contributing to scientific research.

Citizen Scientists have a long and celebrated history, going all the way back to Aristotle, da Vinci, and Darwin, who all made important observations about the natural world in areas outside their educations.

Hannibal says today’s Citizen Scientists are turbo-charged by smart phone technology. “Basically, what we’re trying to do is mob source data collection distribution and abundance on the landscape so we can get a good picture of patterns of what’s happening to species as the climate is changing and help support them and help stem the sixth mass extinction that is currently underway.”

That’s right. According to Hannibal the sixth mass extinction is currently underway. However, it may be possible to slow or reverse these catastrophic changes, if we all pitch in. That means sending in observations from our own backyards, wherever they happen to be.

For example, there was a land owner in South America, who decided he wanted to know what species were on his property. He started documenting species using iNaturalist and a herpetologist in New York saw them and recognized one frog that was new to science. The herpetologist flew down to South America to check it out, and indeed, it was a species no one had known existed.

Hannibal says the collective brainpower and data gathered from legions of everyday Citizen Scientists is critical to combatting climate change, and understanding natural global events, because all this information would take colossal amounts of time and money to gather through other methods.

Hannibal says you too can become a Citizen Scientist, no matter what your favorite subject is. You can help with scientific studies on bees, butterflies, dogs, water quality, outer space. You name the subject, Institutions like Yale, Stanford, Cornell, the Smithsonian, NASA, National Weather Service, National Ocean Service, Audubon society, all need Citizen Scientists.

Hannibal recommends a free app called “iNaturalist” and a website called scistarter.org that connects everyday people to science projects around the world. 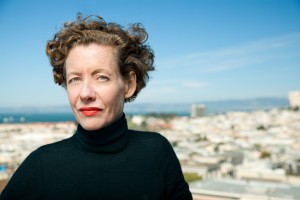 “I find quite a lot of heroes, and mostly they’re regular people, who are attuned to supporting nature in whatever way they can. People who see what needs to be done and are doing it. I think the important thing to understand is, we are all heroes, we are all on a heroic journey, that’s part of our life history. It’s in our power to put this into our daily life to help support nature.  Let’s keep the world beautiful, let’s support it, and keep it, and not lose it.”

Mary Ellen Hannibal’s book, Citizen Scientist, Searching for Heroes and Hope in an age of extinction” provides a rich education on how you can become a citizen scientist, and in Hannibal’s eyes, an essential element to saving our planet and a much-needed everyday hero.