Woman Travels Across Country Searching for Acts of Kindness

More About "Woman Travels Across Country Searching for Acts of Kindness" 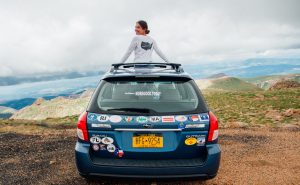 Mary Latham is 32 years old, and she’s searching for acts of kindness. She’s in the middle of an epic road trip across all fifty United States, looking for acts of kindness great and small. She’s finding them too, everything from small moments of sudden generosity, to powerful stories about love and forgiveness.  So far she’s travelled through 38 states, and stayed in 126 homes across America.

Latham’s been on the road for three years, driving across the country in her mother’s sticker-covered blue Subaru. She began this journey in honor of her mother, who died of complications from cancer. They’d spent a week together in the hospital, surrounded by people struggling to cope.

“You know it was the worst week of my life, but it also was such an eye opener to the fact of how lucky I was. It just made me realize how grateful I was for what I had still. And there were people in there alone and there were people in there that were fighting and divorced over their daughter who was dying and it was just it was so hopeless feeling and so depressing and so I thought wouldn’t it be nice to have a book of hope in this room and like you know these stories, whether they’re a little act of kindness stories or stories of inspiring people who’ve gone through something tragic and turned it into some positive thing to kind of help these people that are sitting in there next and so that’s kind of how this all started.”

After her mother died – Latham decided to create something in her honor. A type of book. Stories of hope. Inspiration. Something beautiful she could put in these 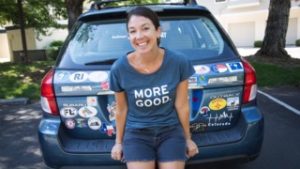 hospital waiting rooms to help others who would wait after her. A book to show them that even though there was so much sadness, so much heartbreak, so much bad…there would always be more good. We just had to look for it.

Early on Latham ‘collected’ one of her favorite stories. A small act of kindness that happened in a bank.  One of the bank tellers was having a bad day at work, and a customer came up to her window to make a withdrawal. The customer looked at the teller and asked if she was all right. The teller, embarrassed, laughed and said “It’s nothing a bag of M&M’s can’t fix!” The two women laughed and the customer left.  30 minutes later, the same customer walks back into the bank and slides a big bag of M&Ms under the teller’s window. The teller never saw the customer again, but she never forgot that sweet small act of kindness. She told her kids and grandkids about it, and 30 years later she told the story to Mary Latham.

“We have no idea how much we can impact another person’s life,” Latham says. “That bank teller never forgot those M&M’s, not even 30 years later.”

Mary Latham’s  project is called MORE GOOD  and it’s 100% crowdsource funded. Latham gets by on the kindness of strangers. “It’s kind of just saying yes to every opportunity thrown at you. So, you’re a little bit exhausted, but you go out there and keep saying yes to any opportunity that’s presented to you. Like little mini leaps of faith every day.” 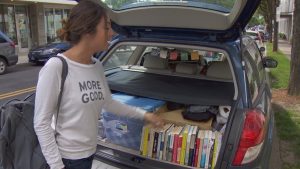 She recalls a family she stayed with in Illinois.

“It was these two sisters who had lost their father to kidney failure. He passed away.  I met them in Chicago at Northwestern Memorial Hospital, because each sister had donated a kidney to a stranger in honor of their dad. It was so amazing to me that people would do that for absolute strangers. They’re just like these little angels walking all around us. One of them told me, “You know when our dad used to drop us off at school, he would say ‘make the day better for someone else.’’” I told her, “Well, you guys really knocked it out of the park with this one, you saved two people’s lives.”

Latham hopes the stories she collects will be published in a book called, “More Good,” and placed in hospital waiting rooms, where people who need inspiration can find it.

For now, the Journey is long, the road hard work. she has twelve more states to go, including Alaska and Hawaii. She was diagnosed with Lyme disease in California, but presses on. She says looking for acts of kindness is a deliberate act

“You choose to focus on the good.  There’s people out there who don’t, and that’s fine. They can do whatever they want. Everyone’s entitled to their own thought 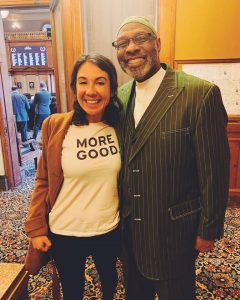 process, but I feel for them, because that’s no way to live, just constantly being in a state of negativity. We all have a choice, and some people out there have been handed a really bad deal of cards, and they’re making the best out of it. They’re doing such amazing things, and to be able to look at them for inspiration is so helpful for a lot of us.”

One of the most powerful acts of kindness she found was in Iowa. Iowa State Rep. Ako Abdul-Samad lost his son to gun violence in 1997, and afterward, he did something extraordinary.

“The person who shot Ako’s son, that person’s mother called Ako a couple days afterwards, and said your son’s friends are threatening my son and they’re going to kill him and they’re gonna burn my house down. You’re the only person that can save his life.’  And so Ako took his son’s killer into the house for two weeks, so he would be safe and then got him somewhere else to safety. It was big. I’m still wrapping my head around the size of his heart. … what a lesson on forgiveness.”

Latham thinks the key to a beautiful world is connection and community.

“There’s all these things pushing us away from each other.  Like, when you’re in a plane and there’s turbulence. No matter who you are, or what your color, or your political views, or your religion, all of that goes out the window, and you’re holding the person’s hand next to you and you guys are there together, because that is all you have, that person next to you.  So if we just treated life a little bit more like that like we are just in this kind of constant plane of turbulence because we are then it would be a lot better off.”